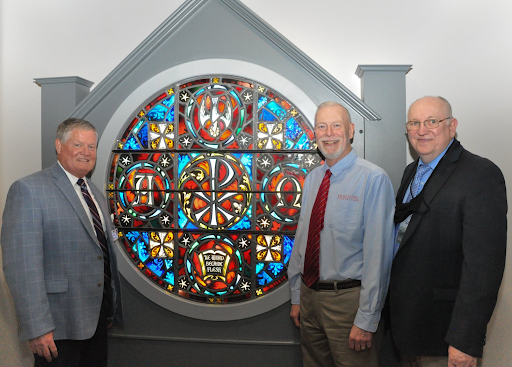 On Thursday February 3, the Berkshire Christian stained-glass window from the Chadsey Hall Chapel was dedicated at the Advent Christian Village (ACV) in Dowling Park, Florida. A special service attended by many was held in the Bixler Chapel. Participants included Craig Carter, CEO/President of ACV, Glenn Rice, BCC President, and Sam Worley, Senior Minister of the Village Church (pictured below). The Berkshire Trustees gifted this window to the Village and it is on permanent display in the Bixler Chapel.

In 1958, the college purchased a former estate and moved from Brookline to the Berkshire hills, becoming Berkshire Christian College in Lenox, Massachusetts. The former carriage house was remodeled for use as a dining hall, chapel, and offices and was named Chadsey Hall. In designing the chapel, Mr. Roy Hare [architectural planner for the school] took advantage of the high ceiling of the former stable section of the building. The dark wood beams were left in place and the walls were finished with Philippine mahogany panels. A platform was built at one end of the room and a stained-glass window was placed above the platform. Money for the window was raised from donations of men working on the building. Before the campus was sold, the stained-glass window was carefully removed and crated for storage, where it remained until relocation to Florida in late 2019.

The window features several Christian symbols including a dove, the Chi Rho, the Alpha and Omega (first/last letters of Greek alphabet), and Bible inscribed with the first few words of John 1:14. All construction work at the school was supervised by Owen Burtt, then of Concord, N.H. Work was subcontracted to local firms.