Where Are They Now: David Janet 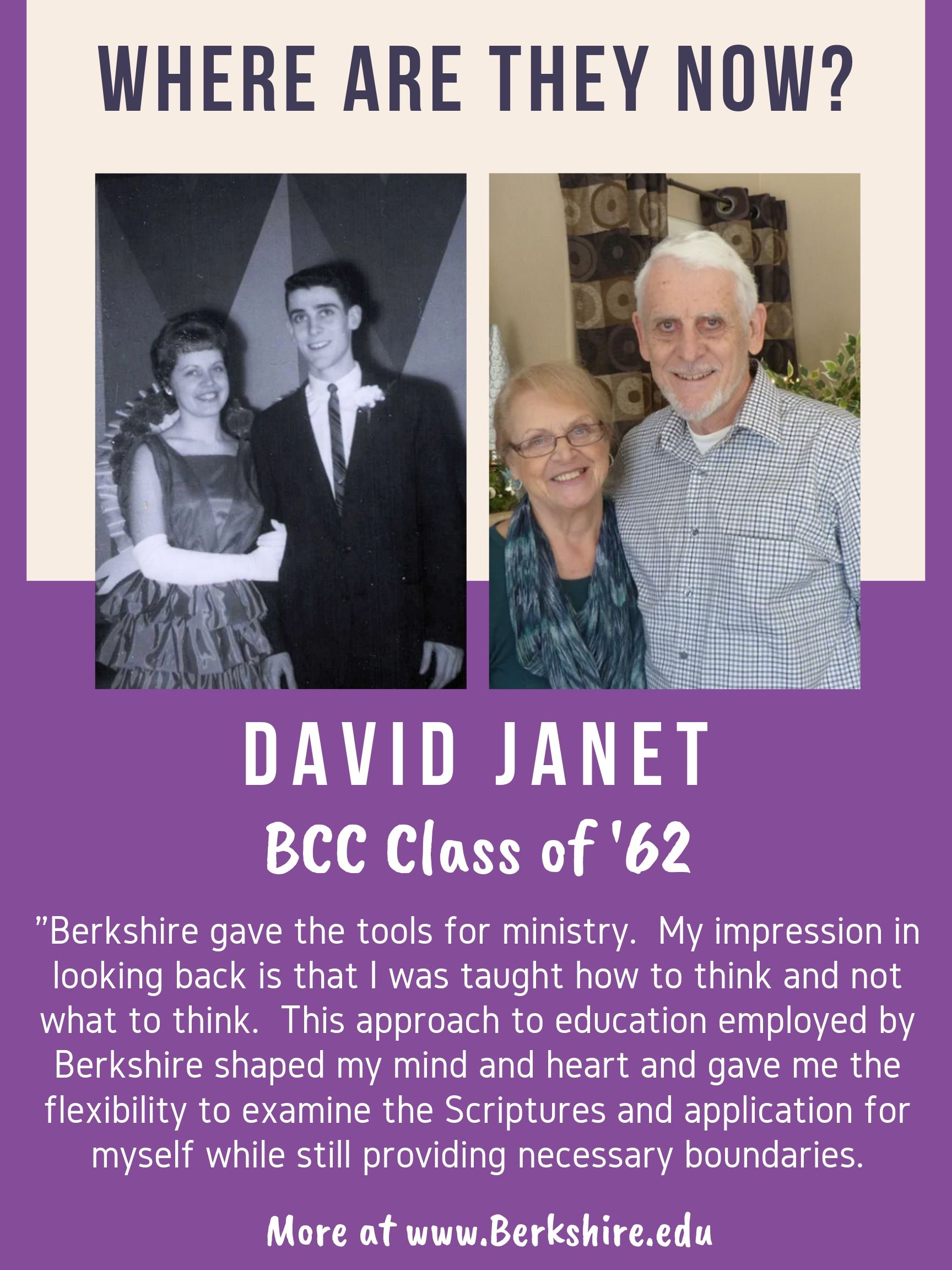 Tell us about yourself: I was born and raised in Bellingham, Wa. Raised in the Bellingham A.C. Church & attended Western Washington University 1957 – 1959 following Marine Corp boot camp and Reserve participation. I Met my wife Janet Kimball at Berkshire and was married following graduation 1962. We have two children (Cheryl Crook Burton), and (Michelle Crook Dias). 10 grandchildren and 10 great grandchildren. Hobbies include photography, hiking, and computer repair.

What are your favorite memories from school? Singing with the Crusaders Quartet and traveling to represent the school in the summer of 1960. Traveled to churches and camps in the South and across the lower United States. Ended up in the state of Washington. Music was promoted at Berkshire and added so much to the entire college experience.

What have you been doing since? I’ve retired from pastoral ministry in 2004. Pastored in New Brunswick, Vermont, New Hampshire, Massachusetts, Washington and California. First pastorate was New Brunswick in 1962 and the final was my home church in Bellingham, Washington 1997 – 2004. 1975 – 1986. Following retirement and moving to Arizona we were involved in Prison Fellowship were Janet was an employee and I was a volunteer Chaplain assistant.

How has the Lord used your training? Berkshire gave the tools for ministry. My impression in looking back is that I was taught how to think and not what to think. This approach to education employed by Berkshire shaped my mind and heart and gave me the flexibility to examine the Scriptures and application for myself while still providing necessary boundaries.

What excited you about your relationship with Christ today? The years of the Christian life have forced me to reexamine many aspects of how the ministry was to be applied to a fast-changing culture. I have more unanswered questions in my senior years than ever before. But it has forced me to embrace the “faith” aspect of the Christian life. The element of “most exciting”, can be described in the fact that we are told so little about a big God and that the significant truth lies in relationship and trust rather than knowledge and understanding. Jesus as truth is understood in the context of He is the truth and that my relationship with Him embodies “what I need to know”, not all there is to know.

Thank you for sharing your story David!

If you’re interested in being featured please fill out this quick questionnaire: https://forms.gle/4tUoWuQtNaSAwmcE9